It is the female owner’s responsibility to make sure that she is flagging when bringing her here. We recommend a progesterone test for optimal breeding time but not required.

There is initial fee of $100 when you bring the bitch to one of our Breeding Facilities. After one tie and picture provided fifty (50%) of the fee is due and the remaining balance is due when the ultrasound confirms that she is pregnant. We shall attempt several ties within the next several days. After one day there will be an additional boarding fee of $25 per day. We request that you supply the food that she has been accustomed to eating to keep her stress to a minimum.

Prior to breeding we require your female: 7 days prior to breeding be tested free of brucellosis, a copy of her SV and/or AKC registration, to be current on her Vaccinations, Deworming medication, Rabi certification and Bordetella inoculations. We will not attempt to breed an aggressive female.

We do everything possible to ensure that your female is ONLY being bred to the stud dog you have selected and that she will be safe & secure during that time at our Facility.

Both parties have read and understood the agreement by signing below, agree to the terms of this contract.

We are fortunate to have Four exceptional German Imported Males

Freitag Placed First in the German Regional Trial. The German national trial took the 200 dogs with

107 out of 200 in The German National Trials.  Freitag lost points because he was a long coat German Shepherd.

Hips & Elbows are A-1 fast Normal

This sable male is the largest and most powerful dog we have ever owned for stud service. Waran is half Czech Republic and West German ancestry.

Waran took high in trial in all phases of the IPO1 & IPO2.

I know of no another German Shepherd at this age with this high level of training that Waran exhibits.

Waran is the largest Male ever had available for stud service at von BachHaus Kennel to breed to your AKC approved Female. Call or Text Michelle: 336-964-0643 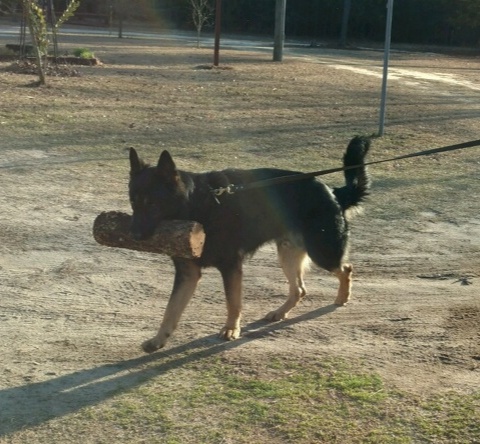 You can see by this video that Urk does not want to come off the sleeve.